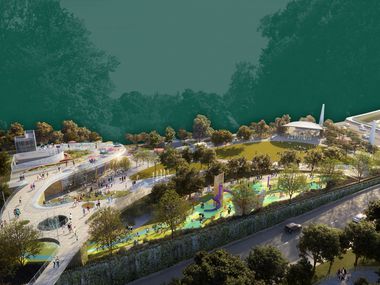 A nonprofit foundation will oversee the design and construction of a park being built over Interstate 35E in Oak Cliff.

The 5 acre park in south Dallas is being built in two phases. The first includes construction for roughly half of the park – from Ewing Avenue to Lancaster Avenue – and is slated to open in late 2023. It’s not clear when the second half, heading towards Marsalis Avenue, will open.

The deck park would span I-35E near the Dallas Zoo and is modeled after Klyde Warren Park in Uptown. The park will include lawns, a playground, water features and an area for food trucks.

Proponents of the project said the park should encourage more economic development and reconnect neighborhoods divided by the I-35E.

When the freeway was built in the 1950s, it crossed the historic Tenth Street district in Oak Cliff and resulted in the demolition of dozens of homes and businesses. Tenth Street is one of the oldest neighborhoods in the city. Founded by former slaves after the civil war, it is one of the few intact freedmen towns in the country.

But today it is one of the poorest areas in the city. In 2018, the median household income for the region was $ 25,385 per year, less than half the median for Dallas County, according to data from the Census Bureau. Analysis of the census data by the Parkland Center for Clinical Innovation shows that residents of the area have the lowest life expectancy in Dallas County at around 64 years of age.

The Southern Gateway Public Green Foundation cited projections in the summer showing the deck park could attract more than 2 million visitors and over 2,400 new residents to the area annually. The new green space could also generate around $ 14 million in new property tax revenue and about $ 330 million in sales tax dollars from shops and restaurants, according to an analysis the nonprofit told the council in August.

Councilor Cara Mendelsohn noted that Dallas lacks formal guidelines to stop gentrification and said she thought it would be “dangerous for our city” to move forward with no plans to combat displacement.

“This is an exciting new project and I support it,” she said, “but you don’t need a crystal ball to see what’s going to happen.”

Councilor Carolyn King Arnold, who represents the historic Tenth Street district, said she would urge the city to work to prevent longtime residents from being evicted from their homes due to rising property values.

The first phase development of the park is estimated to cost $ 82 million. Dallas is contributing $ 7 million through 2017 bonds, $ 40 million from the North Central Texas Council of Governments, and $ 35 million in private money raised by the Southern Gateway Public Green Foundation.

The second phase is valued at $ 90 million, but the sources for that money are not yet fully understood. The nonprofit is committed to raising up to $ 30 million.

Family offices for ultra-wealthy with $100 million or more explode in Dallas and the U.S.