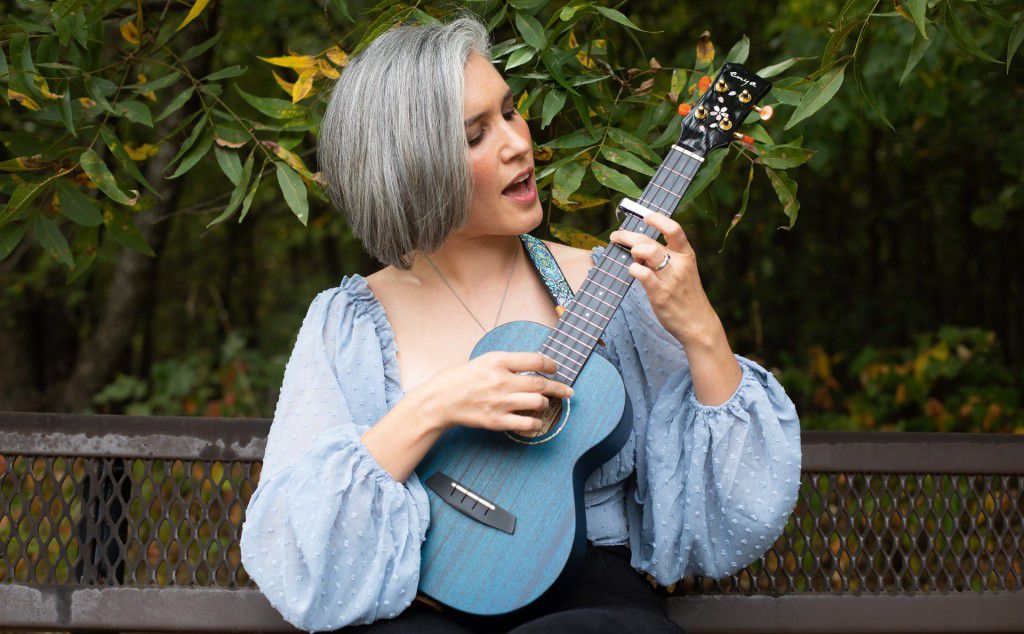 Here’s why 45,000 people are fans of North Texas’ Quarantined Cabaret

After the COVID-19 quarantine hit, Dallas real estate agent Mikey Abrams wanted a place online where he and his theater buddies could escape – to have fun, wear silly costumes and sing songs.

Less than a week after Abrams created it, quarantine cabaret had 20,000 followers. Since then, 25,000 more have been added. People post around the clock and Abrams has volunteers to monitor the tide.

It was always partly about showing off or finding an audience to replace the personal. But especially for some serious local talent, quarantine cabaret has also become something of a practice session or launch pad.

Caroline Rivera and her ukulele

Grapevine’s Caroline Rivera taught herself the ukulele during the pandemic by posting her practice lessons on the Quarantine Cabaret Facebook page.(Keren Carrión | KERA)

A year ago, the pandemic meant Caroline Rivera’s husband was working from home. Your daughter was at home. And Rivera was at home – working in long-distance trading in international trade: “That’s very nerdy,” she said.

Rivera, 40, lives in Grapevine. She was a musical theater actress, but there hasn’t been much of that lately.

So she was restless. She bought a ukulele. She had never played one before, but the plan was: learn to play it and sing along and hone her stage skills.

Then a friend kept asking if he wanted to watch a video of how things were going.

In the video, she can’t even get through the opening words “You are my sunshine” without going nuts.

She posted it on quarantine cabaret.

In two months it went like this: Rivera had learned to add flamenco beats to her strumming while singing Camila Cabello’s 2017 hit “Havana”.

A year after its inception, Rivera posted more than 28 videos on the Facebook page.

“Even if you post something that isn’t your best,” she said, “someone will say, ‘Whatever you do, just keep going.’ So I did. “

So Rivera is now thinking about maybe learning the banjo as well – and possibly putting together a cabaret set. And she got a real performance. She appeared in the Firehouse Theater’s most recent production of In the Heights.

Lachuné Boyd and her brush with Coldplay 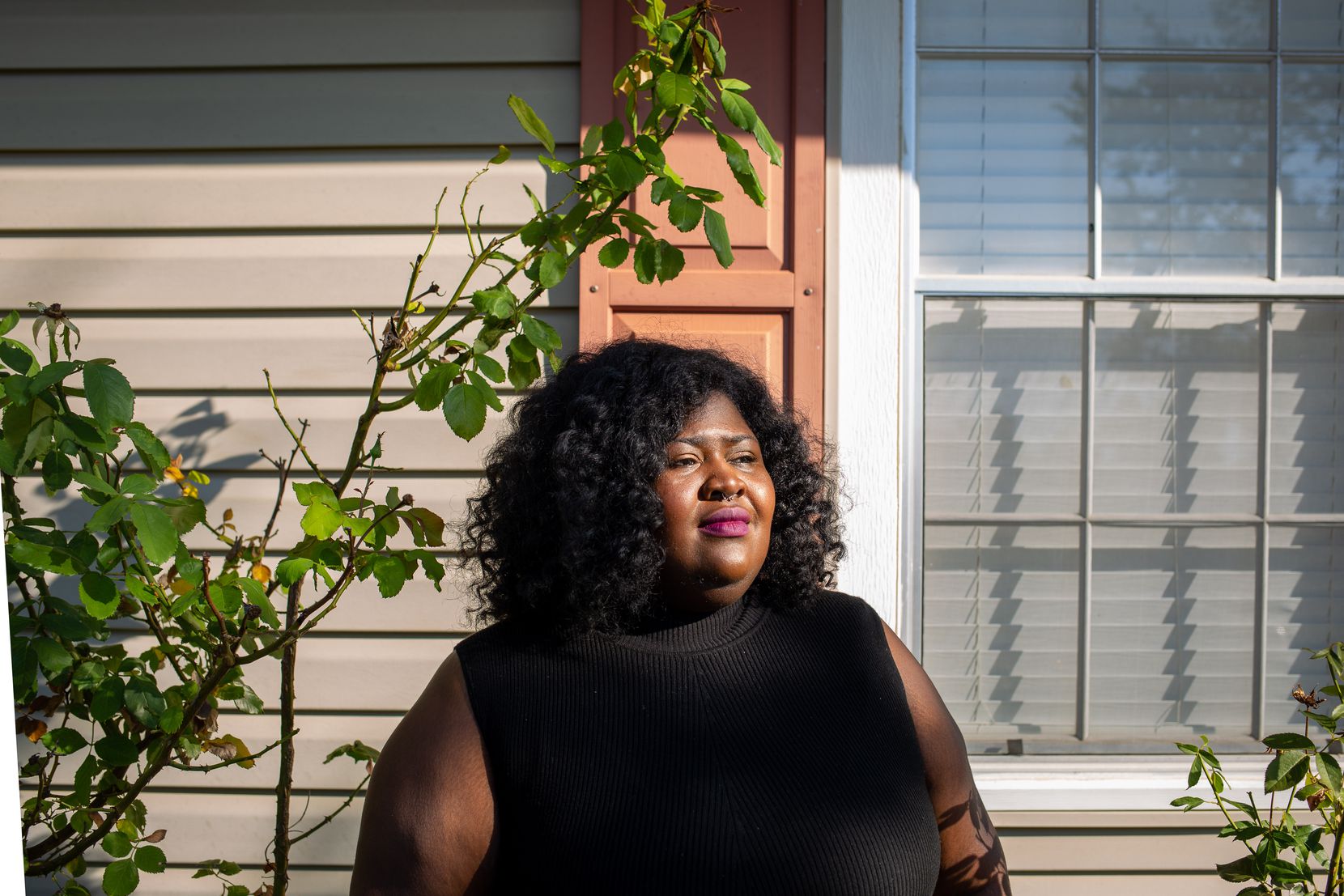 Lachuné Boyd was looking for such a supportive audience.

She moved from Georgia to Fort Worth three years ago – she hardly knew anyone here. She came to do her Masters in Music at Southwestern Baptist Theological Seminary.

Then COVID-19 arrived; she lost her job. Her school has canceled plans for a new a cappella choir that she was in.

“So quarantine cabaret pretty much gave me that community – a lot of people celebrate each other,” Boyd said. “And I wanted to be part of it.”

She has become known for providing her incredible gospel talents with covers of songs by pop groups like the Kings of Leon.

“Those were my favorite songs,” she says. “You know, when I thought about home and in that moment it was as if the lyrics came to life for me.”

Then she recorded Coldplay’s 2005 song “Fix You”. There has now been a bevy of covers of the song, including by BTS and Ed Sheeran.

But because of her amazingly gifted voice, Boyd’s version dwarfs these others. Do not you believe?

Coldplay noticed it on TikTok and commented, “Brilliant!” with a fire emoji. 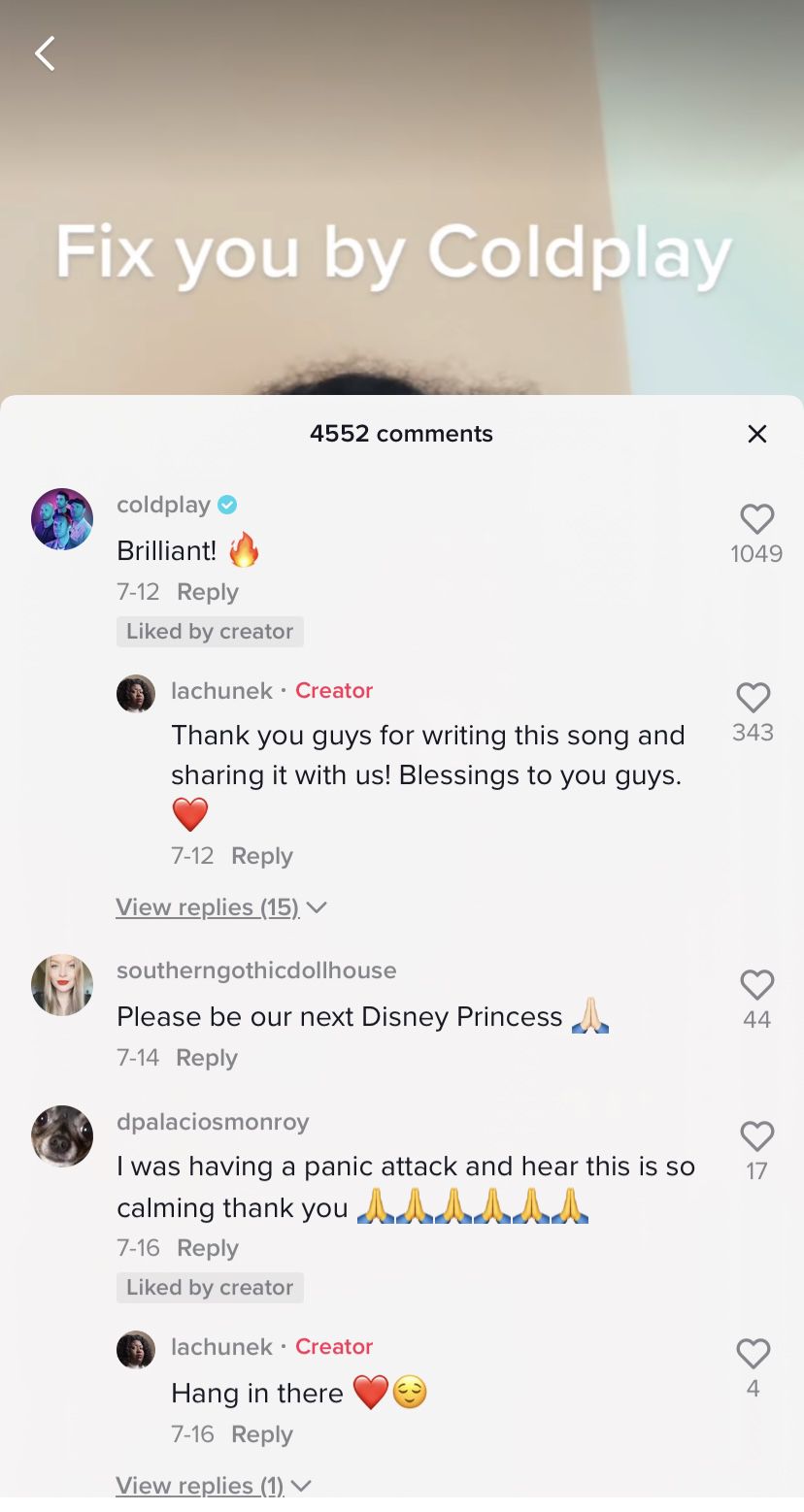 Screenshot of the message Lachuné Boyd received from Coldplay.(Tick Tock)

“The fact that they were just commenting,” she said, “was more than enough to really drive me crazy because – it’s Coldplay.”

Since then, her TikTok videos have had tens of thousands of views, including a duet from “Fix You” with more than 1 million.

Boyd graduates this spring. She has more than 55,000 followers on TikTok listening to her covers of gospel numbers and jazz standards. She has songs on Spotify. She makes a cappella recordings for a dance studio in New York. And she is artist in residence at the Birchman Baptist Church. She has sung as a soloist with the choir and they will soon be releasing an album.

Will the cabaret continue?

Quarantine cabaret has become something personal and important to Abrams too. The guy who started the Facebook group recently cleaned things up and came across a list of life goals he wrote sometime in his twenties.

Abrams, 45, had worked at Don’t Tell Mama, New York’s famous piano bar and cabaret on 46th Street. It’s an after-hours hangout for many who work in the nearby Broadway theaters, and Abrams fondly remembered it as a place where talent like Nathan Lane came through the door on a regular basis. Running a nightclub like this looked like fun, he said, practically a non-stop party.

So one of the personal goals he’d written – goals he’d long forgotten – was simply, “Own your own cabaret.”

When Abrams read this, he said, “I really suffocated myself. It’s a strange detour – but I have to achieve this goal. “

Then there is the news Abrams receives from cabaret fans.

One was from an Idaho gay man. His city is so isolated, he told Abrams, there is no theater, no art community. Abrams said the guy told him he doesn’t even know anyone there who is gay. Almost like a pilgrimage, he drove three hours a year just to see a Broadway musical tour.

And with the pandemic shutting down such shows, even that wasn’t available to him.

“So he said, ‘Thank you for creating this space because the theater was the only place I could really feel comfortable, really be myself.’

“That kind of thing got me thinking,” Abrams said.

“This is more than just a bunch of silly songs on Facebook.”

Because of this, he won’t close the quarantine cabaret when all COVID precautions finally go away, Abrams said.

A version of this story aired on KERA-FM (90.1) and appears on artandseek.org.

This Family Believes Their Loved One’s in Dallas with the QAnon Cult. They Want Her to Come Home.