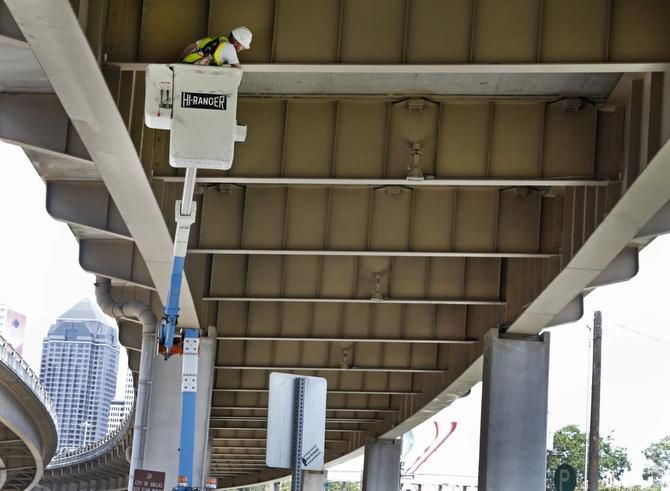 Letters to the Editor – Dallas’ I-345 link, the unvaccinated, ERCOT, gun control

Re: “Wish list for a godsend – Texas is getting $ 35 billion for infrastructure. Here’s a 9 Point Plan for How Dallas Should Be Spending Its Share, ”by Mark Lamster, Sunday Arts & Life column.

It’s hard to contradict most of Lamster’s eco-friendly wishlist on how to spend our infrastructure windfall. However, I reject the suggestion to remove the Interstate 345 link. The tens of thousands of vehicles that travel this stretch of road every day will not go away.

Much of it has little to do with downtown, but is real interstate traffic that only drives through the city. No matter how carefully planned, setting up these vehicles at ground level will inevitably conflict with the expected pedestrian movement and create a much bigger barrier than it exists today.

If an underground Woodall Rodgers-style solution is prohibitive, the best solution would be to partner with the Texas Department of Transportation and find really creative ways to develop the space under the freeway. These shouldn’t be awkward parks or parking lots, but actual buildings with restaurants and other entertainment purposes. Many English cities have successfully done this under their Victorian railway viaducts.

Dear Donald Trump supporters, who will be testified before the House Committee on January 6th, Why pretend you have something to hide when you have nothing to hide? That is, why not stop subpoenas or take the protection from self-incriminations provided by the Fifth Amendment when you haven’t done anything to be charged with? And if you try to use the executive apology or the excuse I-fear-I-might-be-trapped-in-lies, I’ll scream.

There are similarities to those who get vaccinated against the COVID-19 virus: Smokers are at a higher risk than non-smokers of developing long-term health problems. The long-term health problems that smokers develop can drive up health care costs, added Additional burdens on health care workers and secondhand smoke puts nonsmokers at risk of developing health problems. I understand that nicotine is addicting and a difficult habit to break, and there are ways to get help, which is not an easy thing to do.

A vaccine for COVID-19 is easy to come by, however, and I suspect the vaccine’s side effects are easier to manage than withdrawal from nicotine addiction. Kudos to those who are considering increasing the medical costs for these self-centered people who refuse to help the rest of us.

We have learned? guess not

Re: “Have we learned lessons from Enron’s passing? Stock market regulation is better 20 years after the scandal, but the risk remains, ”by Jonathan Morgan, Sunday Opinion.

Apparently not, as ERCOT proves in the years before the icy temperatures and the snowstorm in February that it was not possible to enforce the winterization of the Texas power grid.

What are the consequences?

Let me get that straight: a Dallas Fire-Rescue medic – a mixed martial arts fighter, no less – is being let off the hook for hitting an unarmed homeless man because 1. his “role on the 2019 call wasn’t in it.” insisted on being a primary ”. Supervisor “and 2. his own department screams” Oops! We made a ‘mistake’ with the paperwork? ”In other words, if Dallas Fire-Rescue had filed their report“ correctly ”the first time, Brad Cox might never have been suspended.

I understand that the various agencies involved in this matter have an obligation to obey the laws and regulations as they are written and on the books, and I also note that the Texas Department of Health is “continuing its investigation” but this is nearing the height of idiocy. According to the unofficial “law of unintended consequences”, a paramedic who shows up at the scene of the accident but is not the designated primary carer should be free to take no action and suffer no consequences. After all, he / she is not there to take care of anyone, is he / she?

I hope none of us find ourselves in any of these situations, real or hypothetical.

Hence, Governor Greg Abbott thinks the shooting of the Mesquite Police Officer “is a solemn reminder of the risks our law enforcement officers take every day.” And to minimize those risks, Abbott decided that everyone in Texas should own a gun. Am I the only one who thinks this is crazy

A Michigan couple buys a 9mm semi-automatic pistol with lots of ammunition for their allegedly unstable 15-year-old son, who promptly goes to school a few days later and kills four students. Insurgents armed with assault rifles roam the halls of our Capitol. Conspiracy theorists are still trying to convince us that the shooting of all of the school children killed at Connecticut’s Sandy Hook Elementary was a government conspiracy to instill compassion for all of us for the people who want sensible gun laws.

It is long overdue that people who want to enjoy hunting and target shooting can enjoy these things and fully regulate any other form of gun possession.

Click here to send a letter to the editor. Be sure to include sources.